The KLP Global Kitchen is back for Yulefest Kilkenny!

The Line Up of the Global Kitchen Yulefest Demonstrations 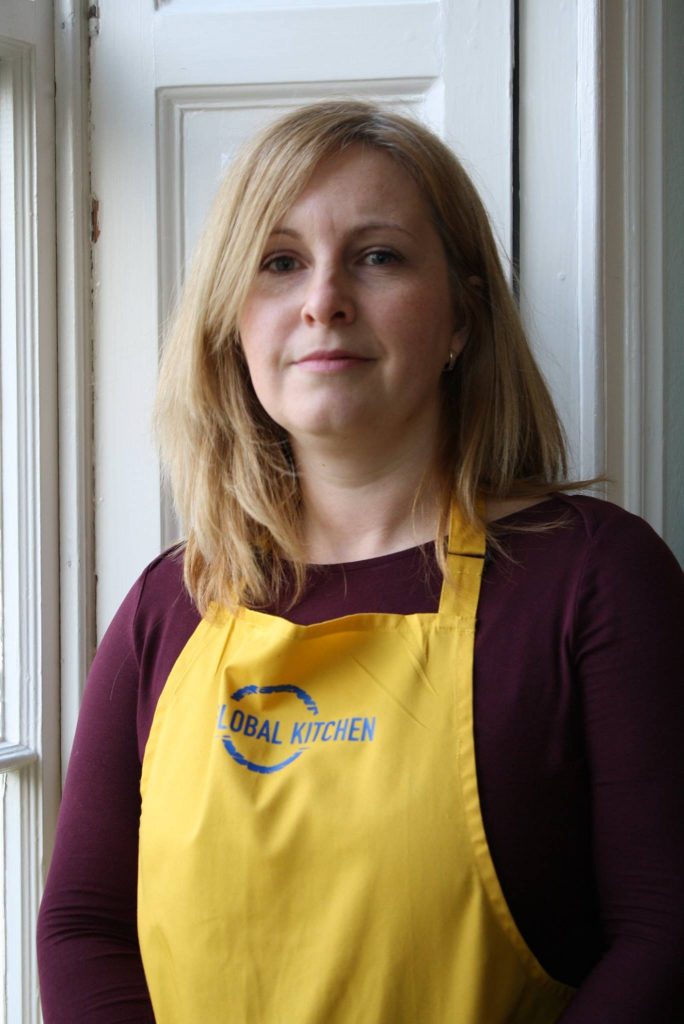 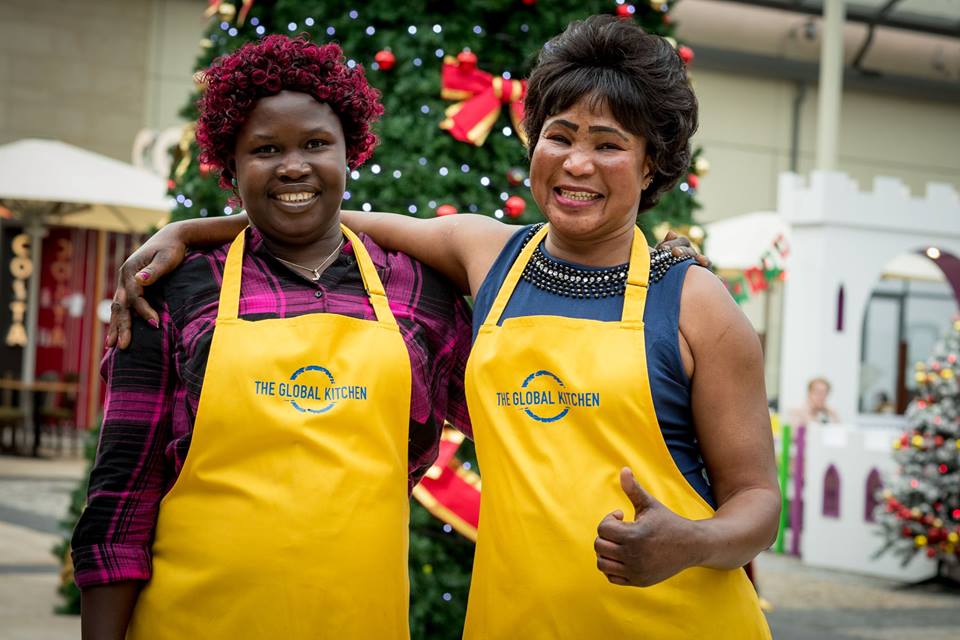 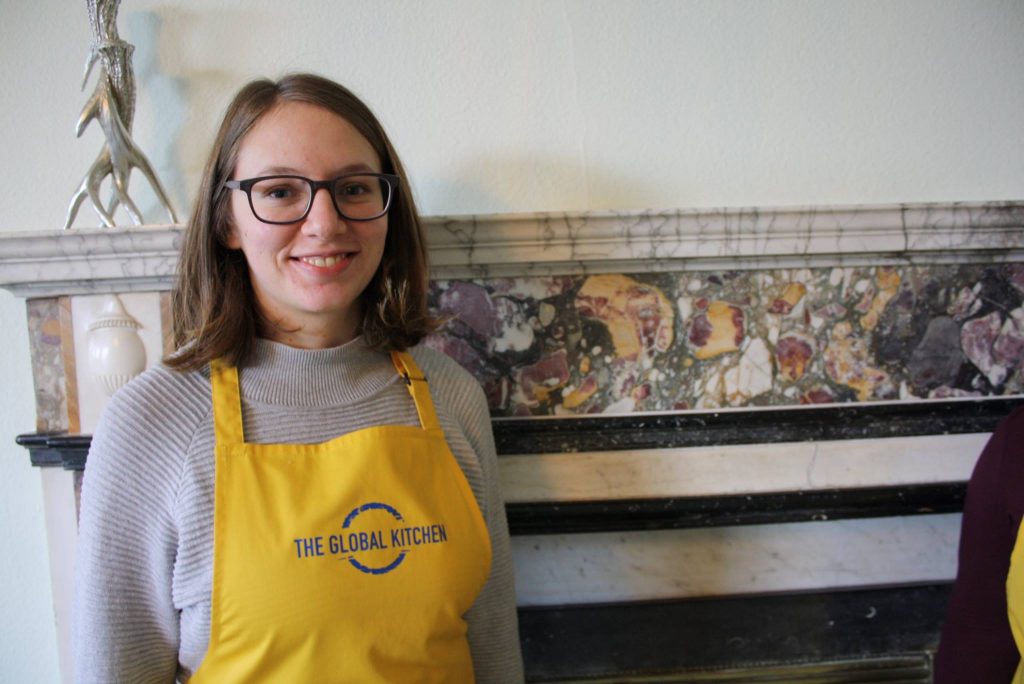 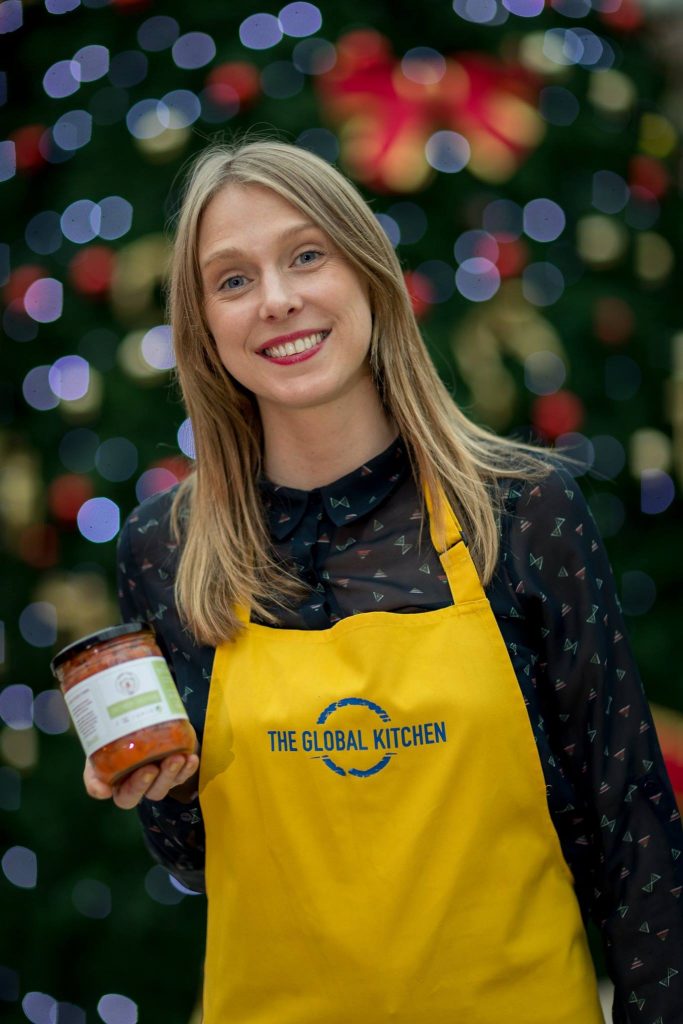 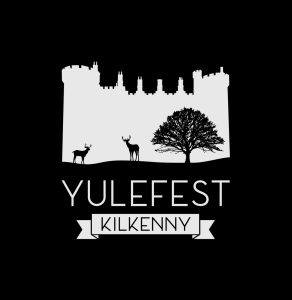 The KLP Global Kitchen at the Savour Kilkenny Food Festival 2017! 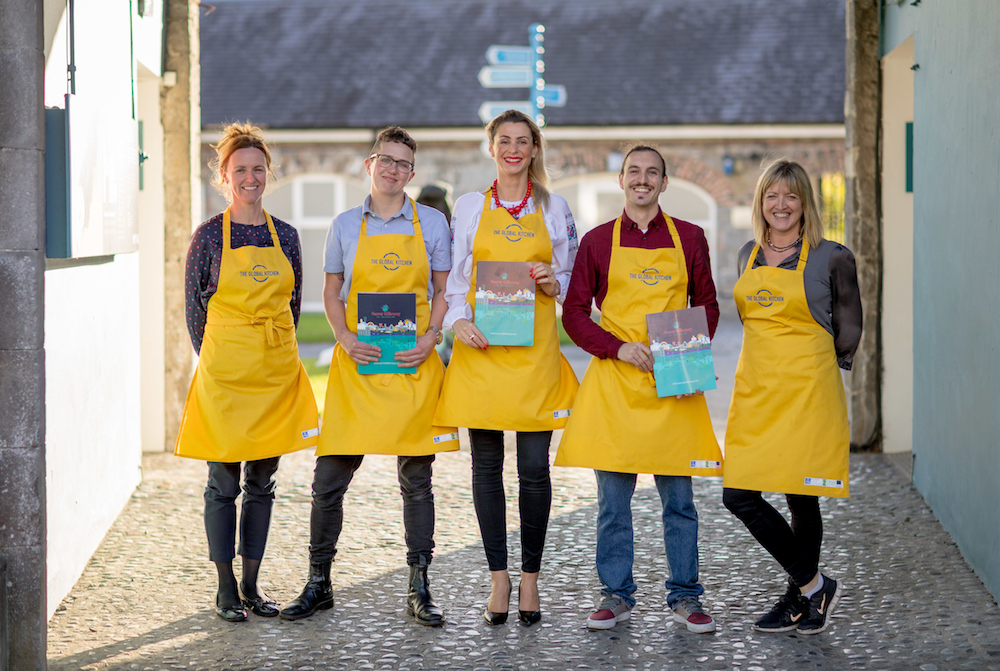 The KLP Global Kitchen will be returning to the 2017 Savour Festival!

Barnbrack with fresh yeast and a traditional Loaf with Hedgehog Bakery, Thomastown 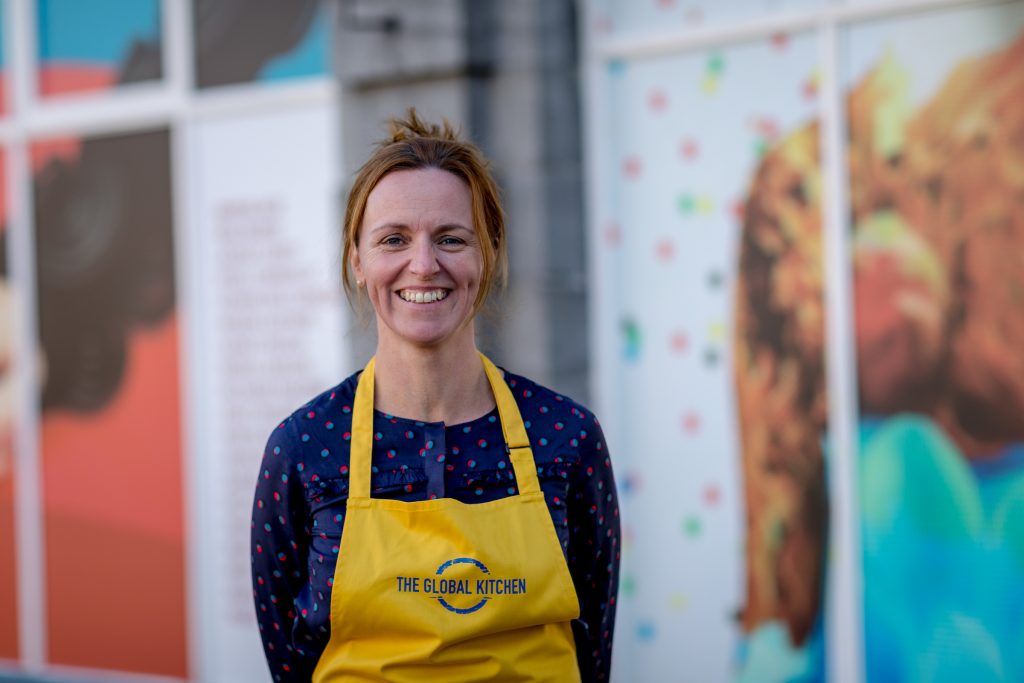 Mags Morrissey grew up on a farm in Tipperary, where good fresh food and baking were part of every day. Her grandparents had a traditional bakery and shop in Templemore and she has fond memories of helping in the shop and watching her grandmother's amazing confectionery skills.

Following a career in the Environmental sector and a period dedicated to raising her family Mags returned to college, this time to the DIT to complete the professional bread course. She moved to Thomastown in 2013 and since set up Hedgehog Bakery. She bakes to order and teaches regular classes. She believes that with the basic skills of kneading, moulding and shaping everyone can bake real bread. She is a keen cook, enthusiastic gardener and smallholder.

Mags will be demonstrating how to make a Barnbrack with fresh yeast and baking a traditional loaf.

Barrows Keep; located along the Barrow River in Graiguenamanagh, presents locally sourced, modern Irish cuisine by Chef Stephen McArdle. The ethos of the restaurant is to source, as organically and locally as possible. After 8 years of owning restaurants in Dublin, the decision to move closer to the origins of farms and producers was a welcome one. Paired with a strong wine list, also focused on organic and biodynamic, Barrows Keep is set to showcase and highlight the absolute best of Irish produce.

Stephen will be joined by local farmer Nick Hill at the festival to talk about keeping the sourcing of food products close to home and how this shapes the dining experience. Come and sample their produce. 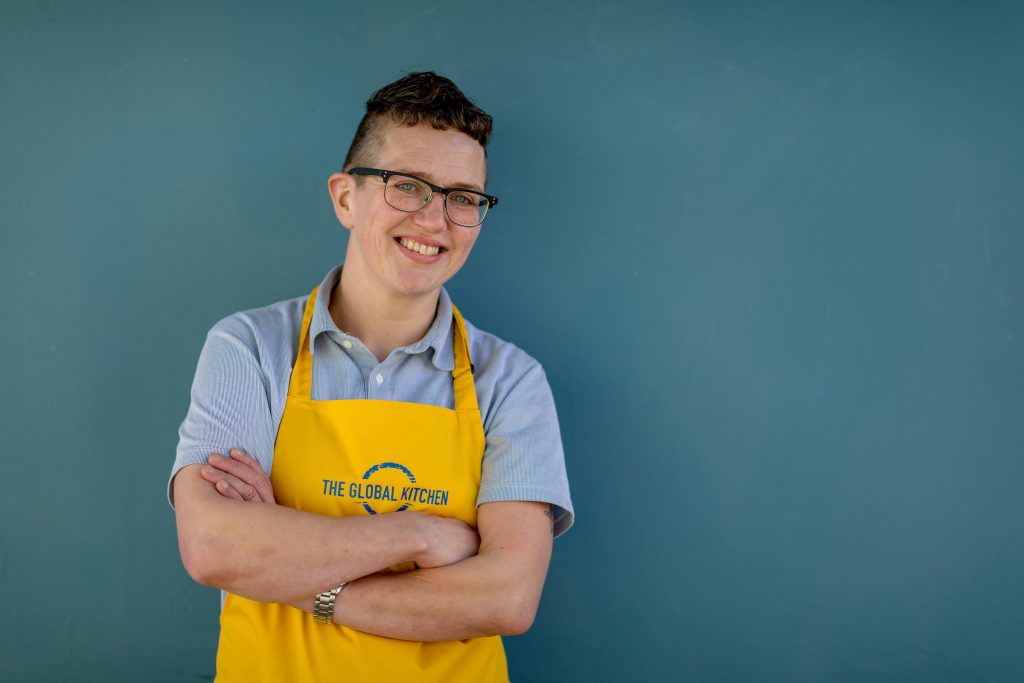 Originally from Mullinahone Co. Tipperary Aoife trained as a chef and pastry chef in Melbourne. She worked in Melbourne for 10 years almost exclusively in  restaurants specialising in dietaries – vegan, gluten free etc.

Aoife runs Fennelly’s in Callan with her sister Etaoin.  Fennelly's is a cultural hub focused on reinvigorating the town centre through food, the arts and civic engagement. They pride in providing locally sourced  produce of the best quality.

At the global kitchen Aoife will be revisiting the food of Melbourne and Sydney – seafood treated with the strong Asian influence that characterises food from that part of the world. 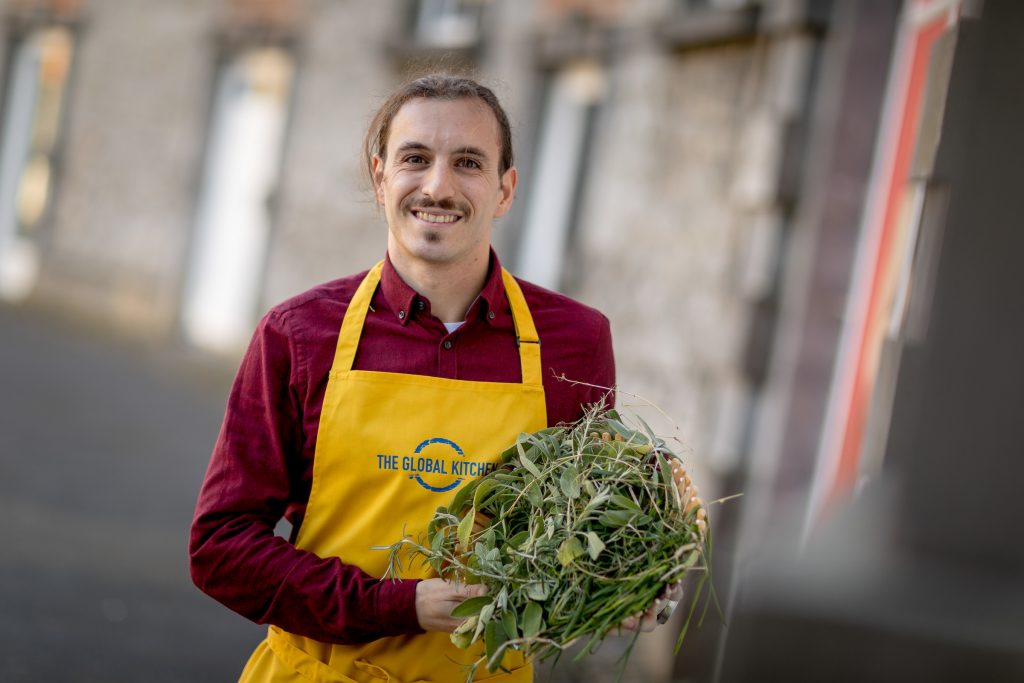 Edouard Adjadj Alves is a people person who loves his profession. At 26 he has 10 years working in the food sector. He recently moved from his native Portugal to Kilkenny.
He helped open the old LAUTRECS Tapas & Wine Bar on Kieran Street and in 2013, he was made Chef de Partie at the well-known Lyrath Estate Hotel where he worked with Chef Gerard M Dunne. He currently works at Zuni in Kilkenny. Before coming to Ireland, he worked as a private chef at Fine Dining in Style and was a sous chef at the Oriental Hotel in The Algarve.
As a southern person he loves the beach, water sports, skate boarding and travel. Edouard will be preparing a classic Portuguese sea food dish at the Global Kitchen. 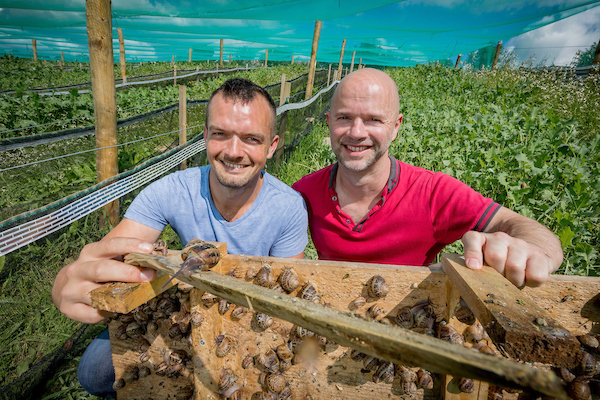 Owned by Joe Dempsey & Martin McCormick Two Fellas Farm is home to Irish Escargot, producers of premium free range edible snails. It is also the base for Martin McCormick Design, which specialise in branded hospitality environments.

Joe and Martin are excited to share their story and some of their first Escargot harvest at Savour Kilkenny 2017, freshly prepared by talented chef (award winning) Marcel Soproni. 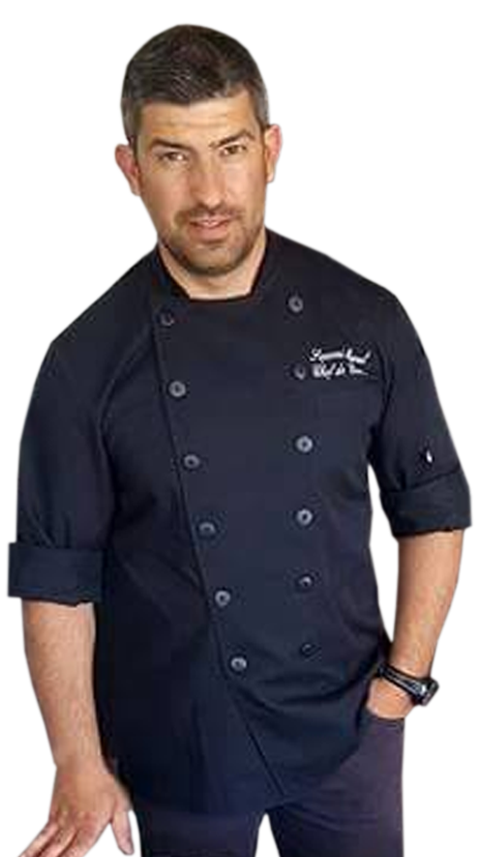 Marcel Soproni, born in Transylvania in Romania. He graduated from culinary school in 2007.  He moved to Ireland 2007 where he ‘started his culinary adventure’. He moved to Cyprus – being partially of Cypriot heritage – and has since focused on Mediterranean style food.
In 2013, he decided to return "Home" to Ireland. He has worked in few of the top restaurants, in Kilkenny and started his own catering business ‘Apron’ early this year. 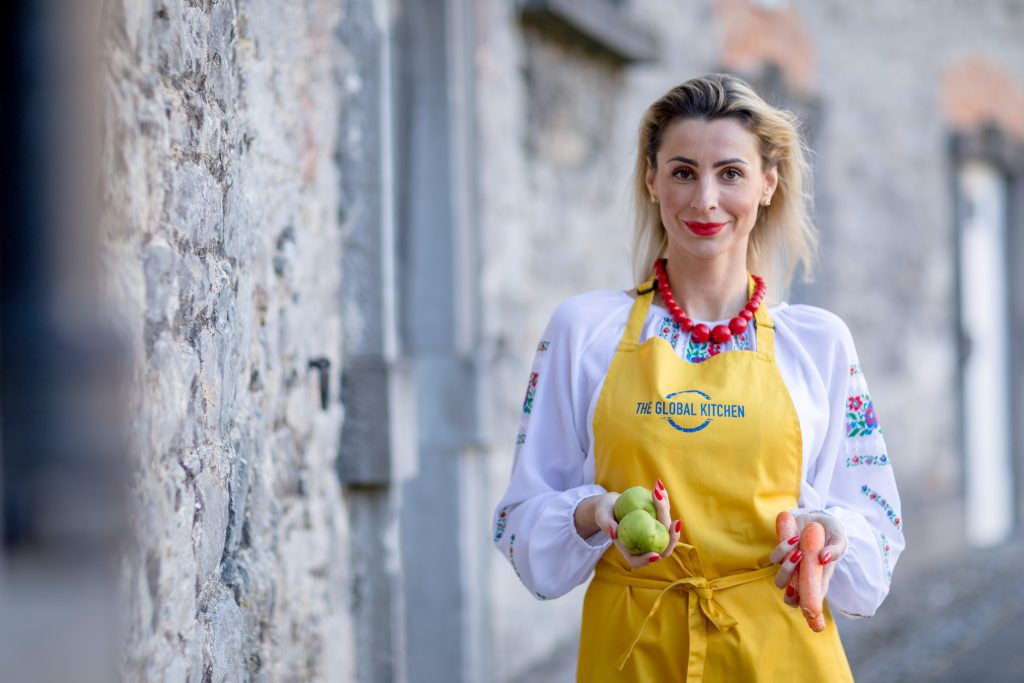 Ania came to Ireland in May 2005 with a plan to stay for five years. Five years then became twelve years, even though her heart still is in her hometown of Kraków in Poland. Her first and biggest passion is dancing, she loves to dance and started when she was only three years old. Ania also loves to read, preferably mystery novels, and loves to watch French movies.
She describes her relationship to food as passionate. Ania highly values quality food accompanied by a glass of red wine. At home she often cooks traditional polish food. Ania will share with us one of the most famous Polish dishes, Pierogi, at the Kilkenny Savour Food Festival. 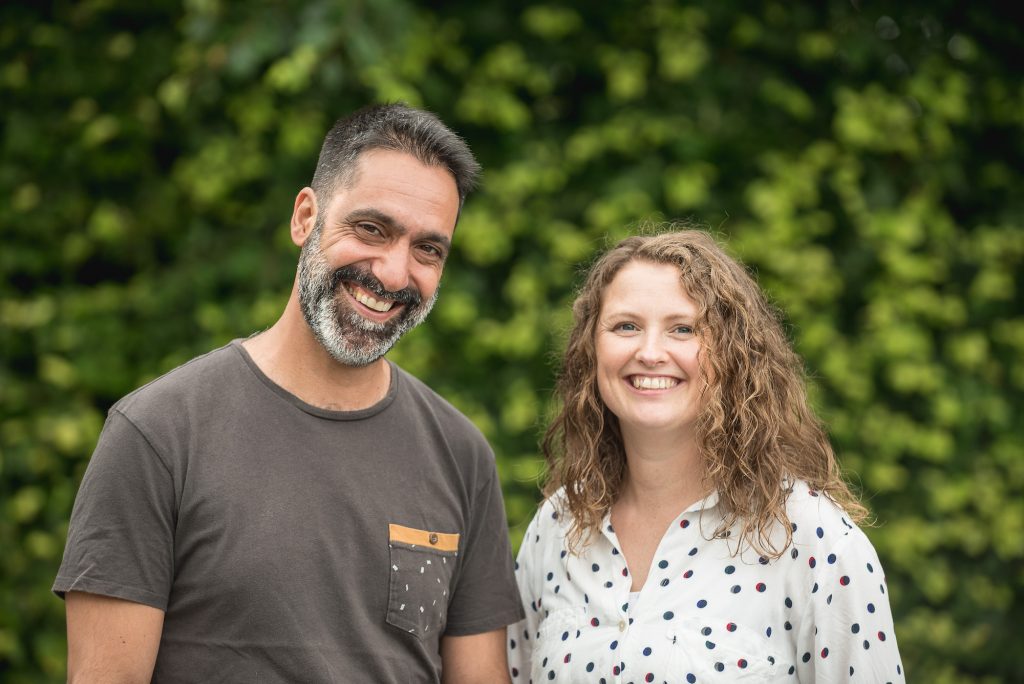 Easy Entertaining with Mezze platters. Mezze platters offer something a bit different to the usual cheese board or sandwiches & cocktail sausages for gatherings at home. Mezze platters are full of vibrant vegetables and salads, delicious dips and flavoursome flatbreads that are always a hit when entertaining at home.
Mezze duo Dvir and Nicola will take you through some simple recipes and key ingredients to make up a Mezze platter and how to put it all together in no time! 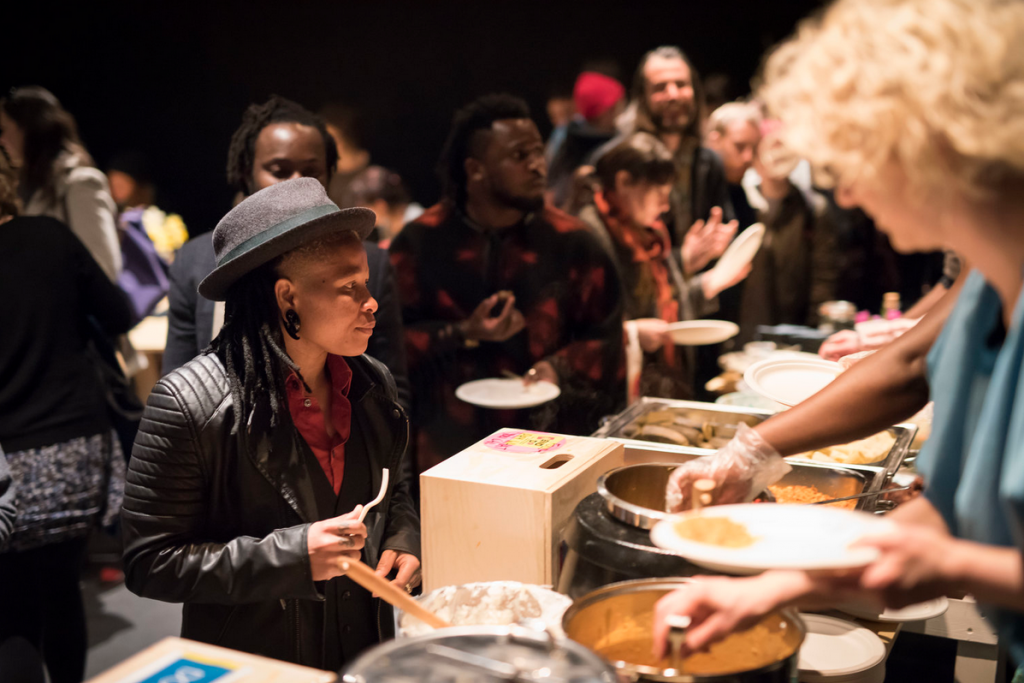 Breaking down barriers with food – People living in direct provision in Ireland don’t have access to cooking facilities. To raise awareness of these conditions, Ellie Kisyombe and Michelle Darmody founded the non-profit project Our Table. Here, food and cooking is used as a facilitator for starting the conversation on the issue and tap the potential of former direct provision residents. Our Table creates a space where people are given the chance to develop their culinary skills and receive professional training, preparing them for a job in the Irish food industry. Hereby recipes and cultural heritages are preserved and shared, contributing to a multicultural Ireland with a great diversity of tastes and flavours.
Our Table doesn’t only cater for events but also operates a pop-up café in Dublin, where their delicious food can be enjoyed. 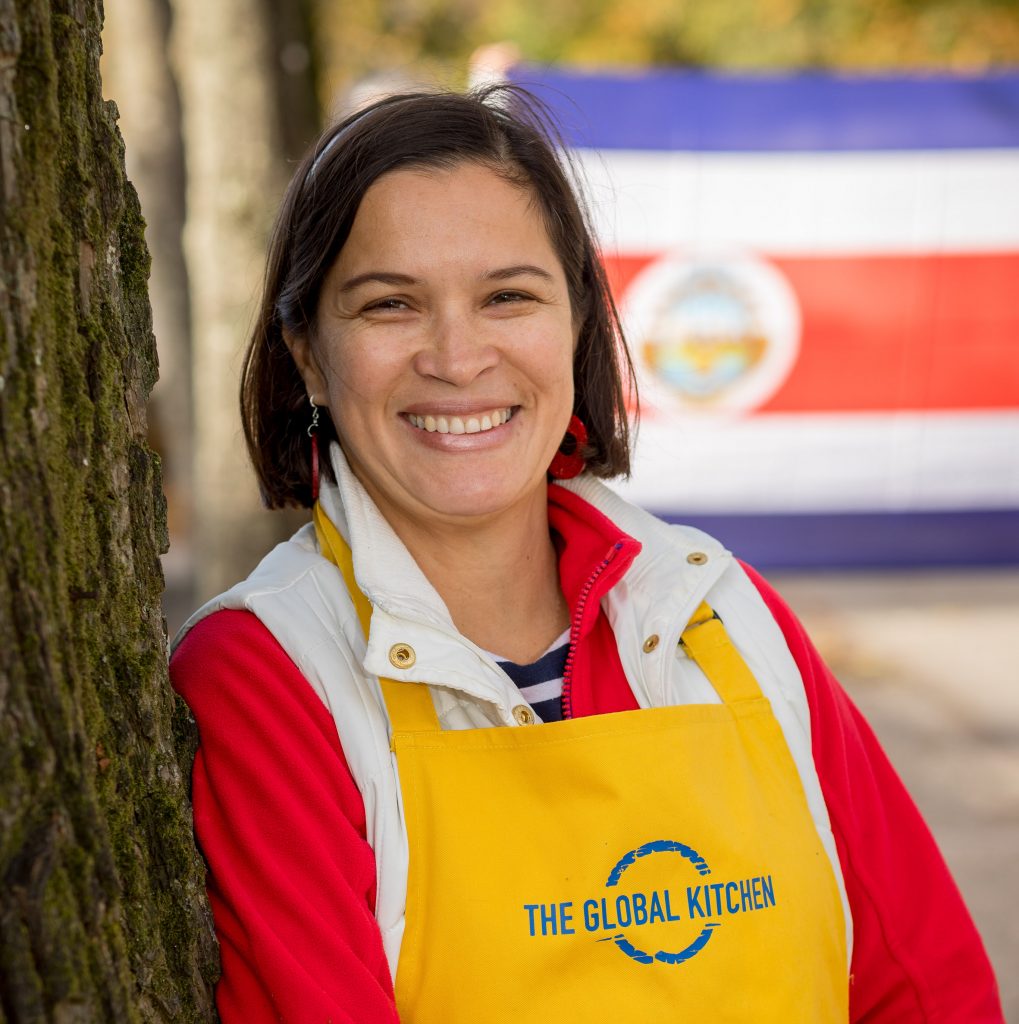 Originally from Costa Rica, Sandra moved to Ireland in 2012 having met an Irish man while he was traveling through central America. A Spanish teacher, Sandra is now based in Kilkenny city. Sandra is passionate about food and culture.  At the Global Kitchen Sandra will be making ‘Arroz con Pollo’ a Costa Rican paella.

Miko Oka, originally from Tokushima, Japan, arrived in Callan from London in 1999 to work for the I’Arche Communities and remained until 2016 when she moved with her partner and daughter to Dusseldorf. During her time in Callan and drawing on her farming background, Miho grew her passion for food.  A maker and sharer by nature the many friends Miho made in the county have had many great meals.

Miho will be joined by some of her friends from I’Arche on Sunday at 2 pm in the Global Kitchen where she will make and share Tsukune – chicken meat ball with a homemade teriyaki sauce – and a really simple Japanese salad with a classic easy to make Japanese salad dressing. 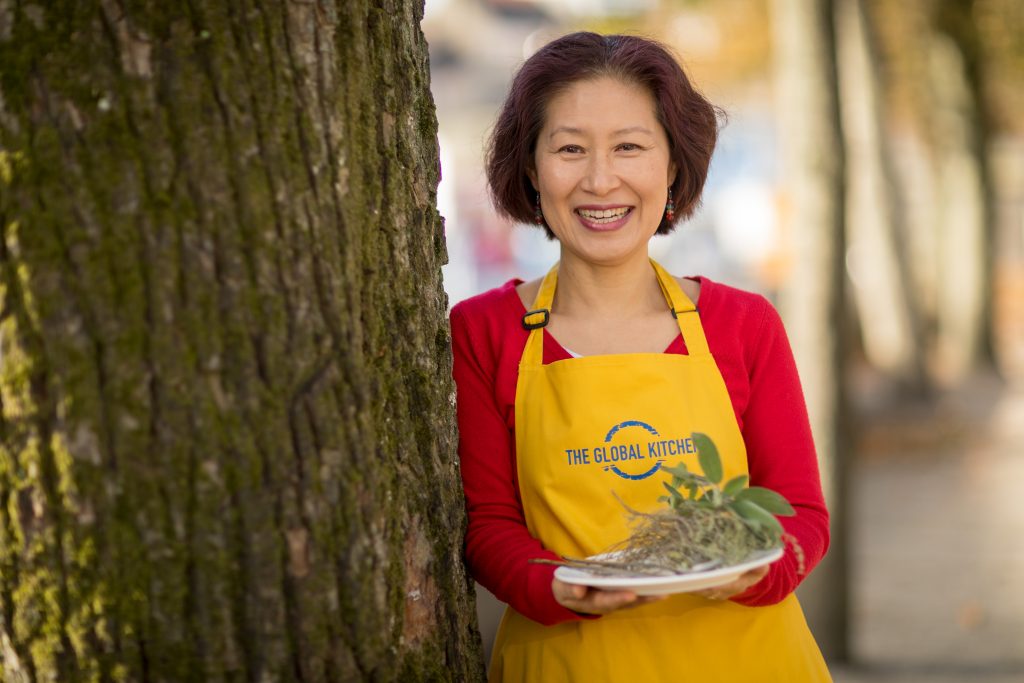 South Korean Junghee Kang came initially to Ireland as a student in 2005 and fell in love with this country. .As a teacher she has worked all over the world returning to Ireland and eventually settling in Kilkenny in 2016.

Junghee will make two Korean dishes Japchae & Bologi – the first dish is a sweet potato noodle and vegetable dish and the second a marinated beef stir-fry. 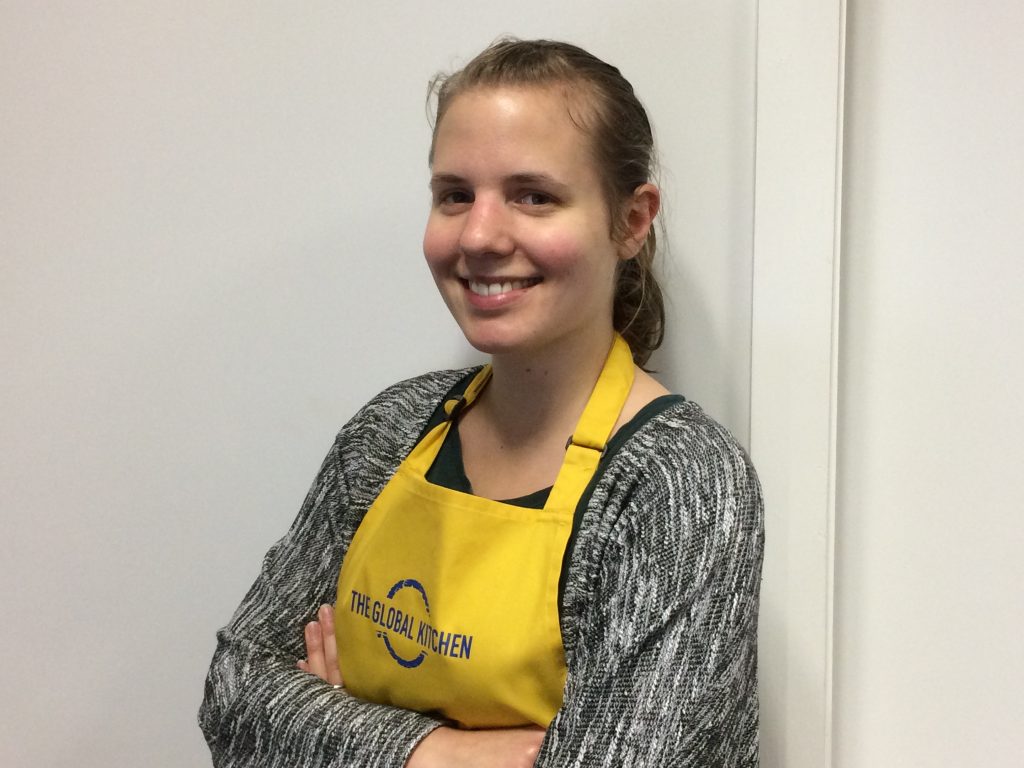 Lia was born in Hannover, Germany and visited Ireland the first time when she was 12 with her parents. Ever since then, she keeps coming back!

Lia is currently studying Regional Development in Germany and is here for an internship with Trail Kilkenny.
One of her all-time favourite hobbies is baking. In secondary school she and her best friend used to meet up at least twice a week after classes to try out different recipes.

At the Global Kitchen she will bake something sweet that is typical for this time of the year.